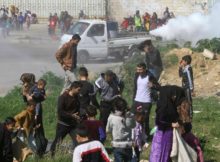 Please support the BDRA with a donation, however small, by a secure donation to the BDRA’s fund for refugee sponsorship. The spread of COVID-19 makes it even more urgent that we are able to help our refugee family to resettle in Canada.

In the western world we are suddenly becoming acclimatized to things many of us have never truly experienced – adversity, worry and an inability to be sure what the future holds, or how best to prepare for it. Such concerns have long been familiar to refugees and those impacted by war around the world. Yet, tragically, the extraordinary level of daily adversity that they already faced has just become much worse through the threat of COVID-19. Those people facing worsening challenges include 17 million Syrians, 11.5 million of whom have been forced from their homes since the war began nine years ago, while millions more still live in the active war zones.

The BDRA is currently working to reunify all members of a family we first sponsored to come to Canada in 2016. The eldest daughter, her husband, and their two very young children are currently living in Beirut, Lebanon, and are in the process of applying to come to Canada with the BDRA’s support.

As we described on February 12th, daily life for refugees living in Lebanon prevents most avenues of legal work, or even legal residency. The vast majority of refugees in Lebanon live below the poverty line and are in debt. The very nature of refugee camps across the Middle East makes ‘social distancing’ almost impossible to achieve. It is hardly better for those living in Lebanon in rented accommodation in cities like Beirut, which are cramped, poorly maintained and often lack basic necessities like reliable water. In such circumstances such basic acts as regularly washing one’s hands may be impossible.

The economic and healthcare situation in Lebanon was bad before COVID-19. On March 8th, Lebanon announced it was unable to to repay a $1.2 billion ‘Eurobond’, worsening an existing economic crisis. Syrian refugees living in Lebanon are restricted in their access to a healthcare system that is far from perfect for Lebanese citizens.

The BDRA remains committed to reuniting all members of our Syrian family in Burlington as soon as possible. To do this we still need to raise funds to support that family through their first year. With borders closed around the world, there are likely to be additional delays in the processing of applications and providing travel documents, but we need to be ready as soon as our family is cleared to travel.

Please consider donating, even now at a time when we are dealing with our own challenges. In a truly global crisis with no respect for borders, race, religion or wealth, the more we can do to assist our neighbours – wherever they may live in the world – the sooner the threat of COVID-19 can be defeated.