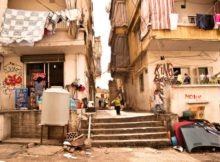 The war and accompanying humanitarian crisis in Syria is not only far from over, it is in fact growing worse. CBC news yesterday provided an update on the 700,000 people who have been forced to flee their homes since December alone.

Of Syria’s population of 17 million people, 5.5 million are now living as refugees in neighbouring countries such as Turkey and Lebanon. Another 6 million people have left their homes in Syria to find safer locations within the country. However, ‘safe’ is often relative, and cities which were once relatively safe havens, such as Aleppo and Idlib, are now on the front line.

Refugees in Turkey (3.6 million), Lebanon (circa 1 million) and Jordan (circa 700,000) face enormous difficulties securing the basic necessities of life – food and shelter. It is usually impossible to obtain work permits or official residency. Syrians are often viewed with hostility by both the citizens and governments of the host countries they have fled to.

In Lebanon, the government is increasingly attempting to force refugees back into Syria and refuses to renew residency permits. This means that most refugees in Lebanon are now technically present illegally, which in turn means they have limited ways to earn money and survive. The vast majority of refugees in Lebanon are not only living in poverty (70% in 2015) but also in debt (89% in 2015). In 2016 most households survived on less than $85 per capita per month, yet it can cost $53 per month simply to keep a tent on rented land and $250 for an apartment which may be in poor condition and suffer water shortages.

A small percentage of Syrians have been able to emigrate to countries such as Canada to begin new lives in safety. In late 2015, the Burlington Downtown Refugee Alliance began working to sponsor a family to resettle in Canada. In December 2016 our family arrived, and the BDRA have helped them to establish themselves in Burlington in the years since, initially with daily practical support as they became familiar with life in Canada, learned English, the parents found jobs and the children became familiar with Canadian school life. While the family is well-established and self-sufficient now, St Luke’s Church and the BDRA remain involved and supportive.

However, the eldest daughter of our family was not able to come to Canada in 2015 because she was married and could not be considered a dependent. The daughter, her husband and two young children are still living in Lebanon and face daily hardships that include finding enough food to eat. BDRA is working to reunite the entire family in Canada and is hopeful this may take place this year. We shall be making more announcements soon.

If you would like to support BDRA in helping a family to escape poverty, prejudice and danger caused by war, you can donate today.